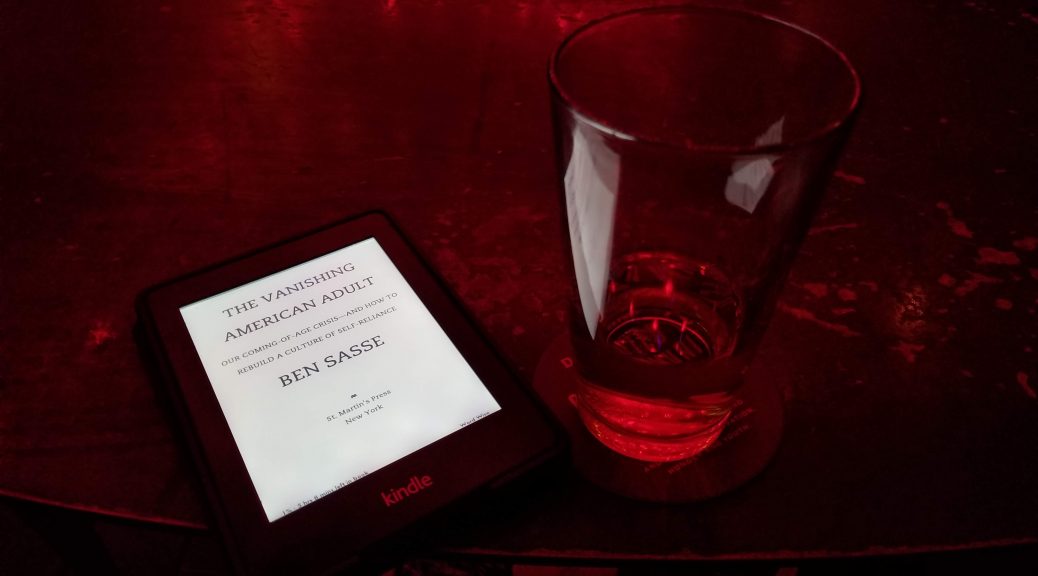 I just started reading Ben Sasse’s book “The Vanishing American Adult” and I have to say I agree with every single word. It’s uncanny really.

Quick personal note while I’m here. Every adult I know has lived a lifetime of experiences. They have made friends and enemies. They had kids, they’ve lost parents, friends and other loved ones. They have dealt with terminal illnesses and suicides, unemployment, homelessness and other hardships. They’ve traveled the world and witnessed a thousand things, some ugly and some beautiful. All of this helped shape their world view, their idea about society and their political stance.

The idea that a handful of angry tweets or a series of unhinged posts on Facebook will somehow influence their vote in any way is laughable. Save yourself the embarrassment. Be better. 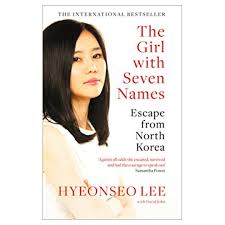 Fantastic book. An absolute must read.

The Girl with Seven Names: A North Korean Defector’s Story by Hyeonseo Lee 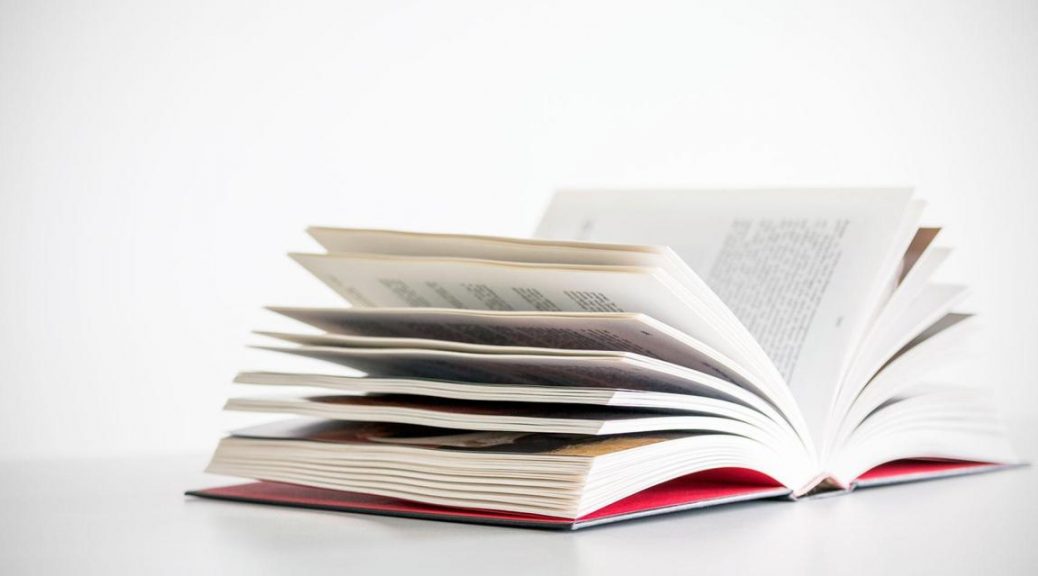 For no particular reason – that I’m aware of anyway – I thought about “Atlas Shrugged” in a new light last night. I used to see the individualist, objectivist and logical aspect of the book and I valued the story for it. But there’s a completely different aspect I’ve been ignoring so far that seems to be far more important and relevant today. In fact the main question Ayn Rand asks strikes me this morning as the most important one anybody can ask; when would you quit? In other word; how far does a society of Men as to go for you – a self sufficient, productive individual – to say; “Stop, I will no longer support this madness.”

Essentially the book is about John Galt refusing to gift his community with his new invention, leaving a society he despises to its own predictable collapse.

There’s a certain percentage of individual who are a positive force to their community today. They pay taxes and not to be too blunt but these taxes are used for anything from the financing of K-12 to the bombing of Yemenite children.

Let’s forget about D.J. Trump since by any standard is a pretty melow president regardless of what some seems to believe. Instead, let’s project ourselves to 2024 and the election of a new American president. Let’s assume this newly elected president decides that the starving of the Venezuelan people by Maduro has been going on for too long and starts bombing down the place. Then the US President start ranting about Iran and decide to send an armed force. What else? Bomb Saudi Arabia as pay back for 9/11? Triple the military involvement in Afghanistan to put an end to the longest armed conflict in centuries? I’m sure there’s some place in western Africa we could bomb to…
I think by now you see the point. How far your own elected government as to go for you to either leave the country or possibly take up arm against your own government and bring it down?

Obviously if you’re single and have no kids it’s an ‘easy’ decision. After all, you just have to pack everything, leave behind your family, your friends and the culture you – used to – love. Then again if you factor in the love of your life it gets more complicated. Adding kids to the equation and it’s a whole different animal.

Talking is cheap. The whining and crying over Trump that has been going on for almost two years tells us that much. “To act” is far more difficult. An hypothetical would be helpful here. Luckily human History provides us with plenty of despicable leaders. We could very well use Adolf as an example – it’s very fashionable these days – but let’s take Stalin instead for the sake of variety. Between the starvation of his own people, the eugenic policies, the systematic killing of jews, the murder of political opponents and the completely random mass assassination of people for the sake of absolute control we have plenty enough for our hypothetical. Let me remind you of the question here; Where would you have stopped financing that society?

I’ll let you in on a little secret. Chances are you would have done nothing different than the previous generations. You would have used every rationalization possible to justify your indolence and docility towards the most murderous system of government. It’s nothing special really. Most people would. I think that’s what makes the question raised by Ayn Rand so pertinent even today. It forces every individual to look deeply into the mirror, to gather all the honesty an individual can muster and forces that individual to answer; “what is my breaking point?” 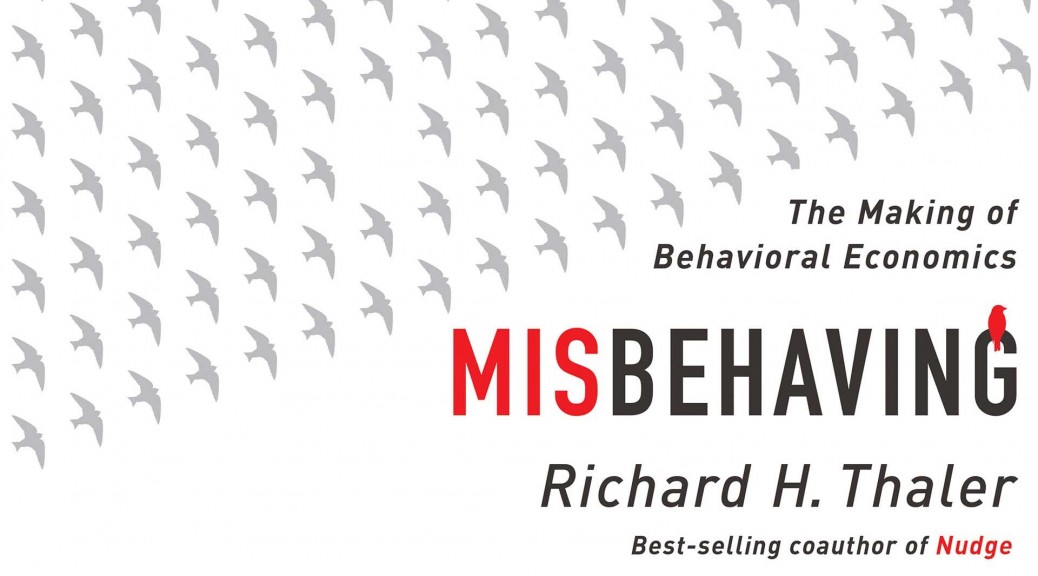 Just finished reading Misbehaving: The Making of Behavioral Economics by Richard H. Thaler
I never thought I’d say that about economics but it’s actually quite interesting and even funny – yes, funny – at times. This book focuses on the history of the slow development of this new field of economics. It’s based the fact that people don’t always (mostly never) behave rationally (they’re full of biases and prejudices) and logical (some would say cold) systems do a poor job at predicting the behavior a people inside a social context; be it a company, a government or a country.
The book is certainly not perfect. I strongly disagree with any argument made based on the premise that there is such a thing as “intrinsic value.” I consider this one of the biggest fraud in today’s economics. Turns out, there’s no such thing as “value” in nature. “Value” is a man-made idea. It represent an estimate of the desire of both parties involved in a trade to actually validate the trade. In essence; there’s no such thing as “value” outside the context of a trade; only estimated value. The action of trading is what validates the value.
Also the author bases his critic of the pricing of the stock market on the fact that the total shares of a company should always represent the actual value of that company at any given time. This is utterly ridiculous and borderline a straw man argument. At best they represent the average value of millions of estimates, forecasts and projections made over several years by investors with different goals, means and aversion to risk.
A few quotes from the book:
– “Giving up the opportunity to sell something does not hurt as much as taking the money out of your wallet to pay for it. Opportunity costs are vague and abstract when compared to handing over actual cash.”
– “The fact that a loss hurts more than an equivalent gain gives pleasure is called loss aversion. It has become the single most powerful tool in the behavioral economist’s arsenal.”